I’ve always wanted to design my own clothes. The first step towards learning to do that looks like learning to sew, so here’s my first sewing project, completed in November 2018: 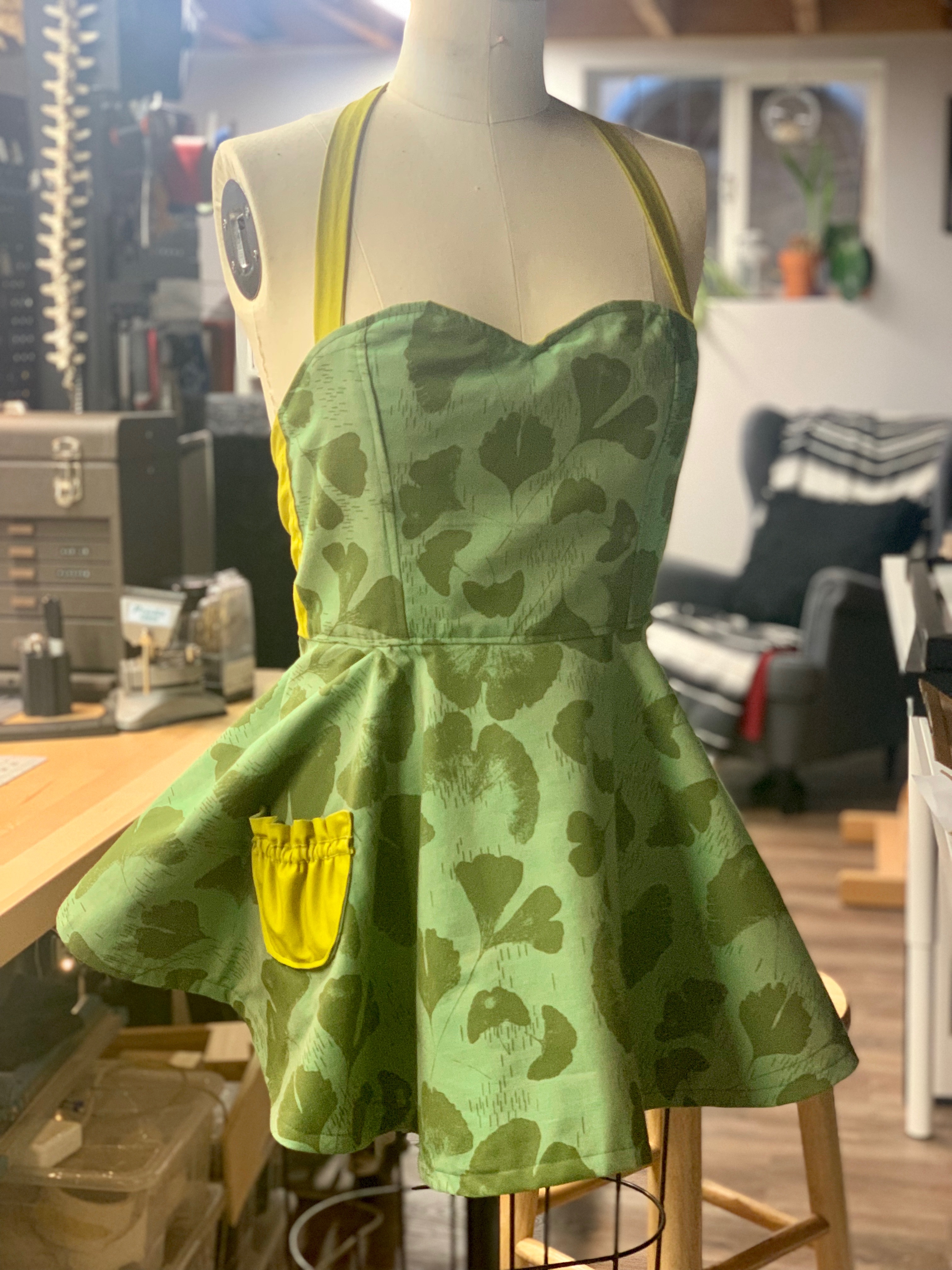 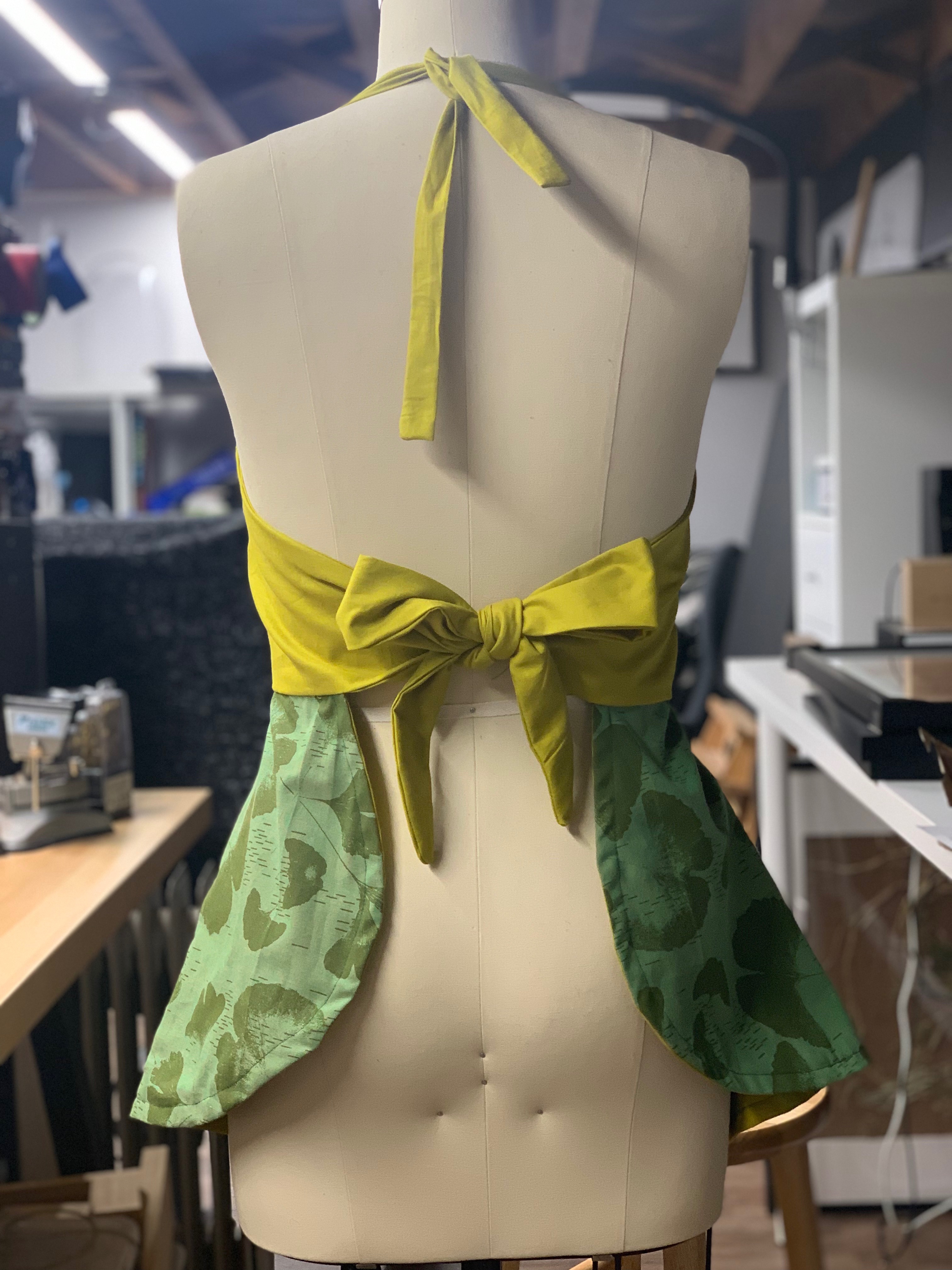 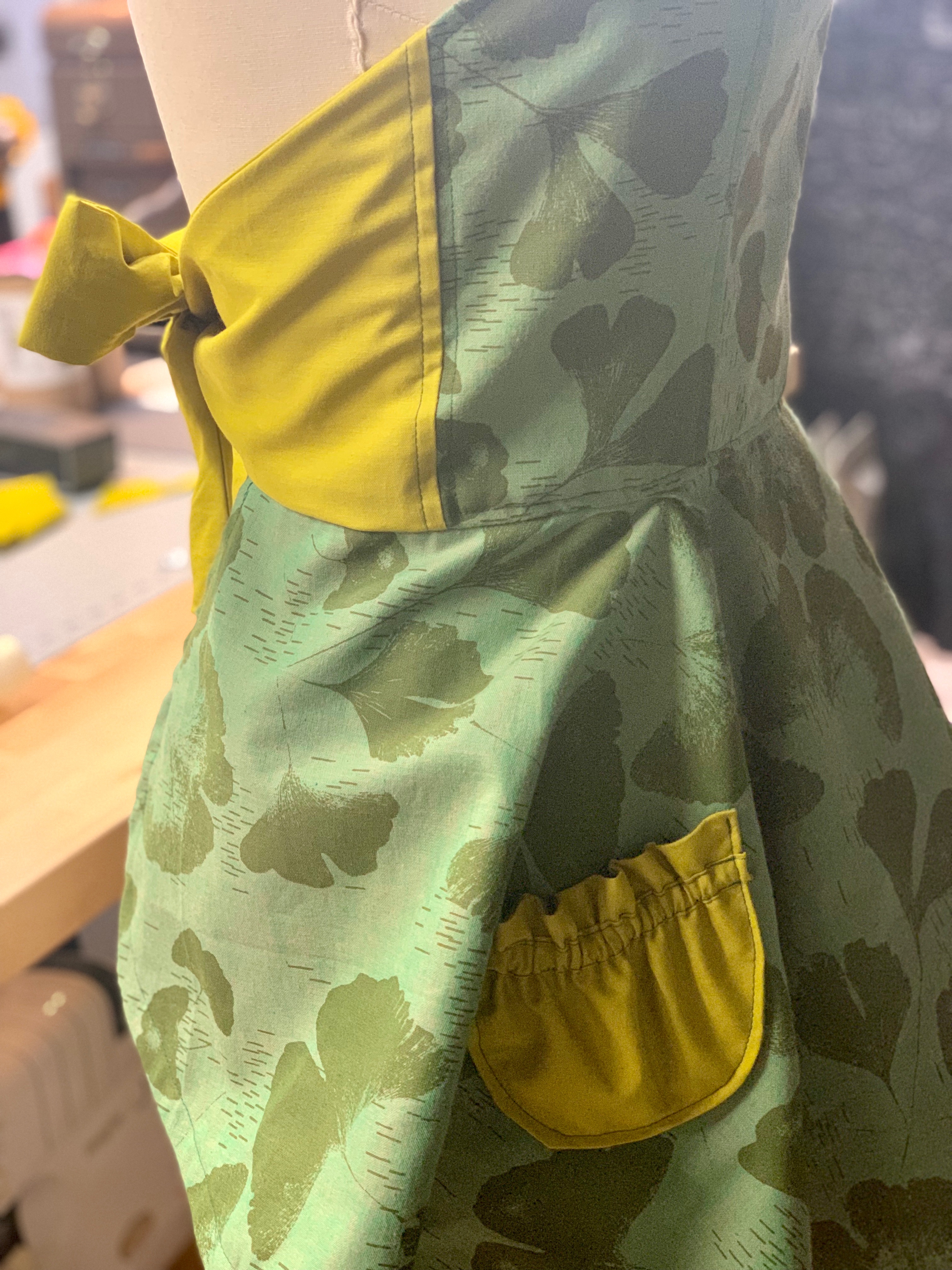 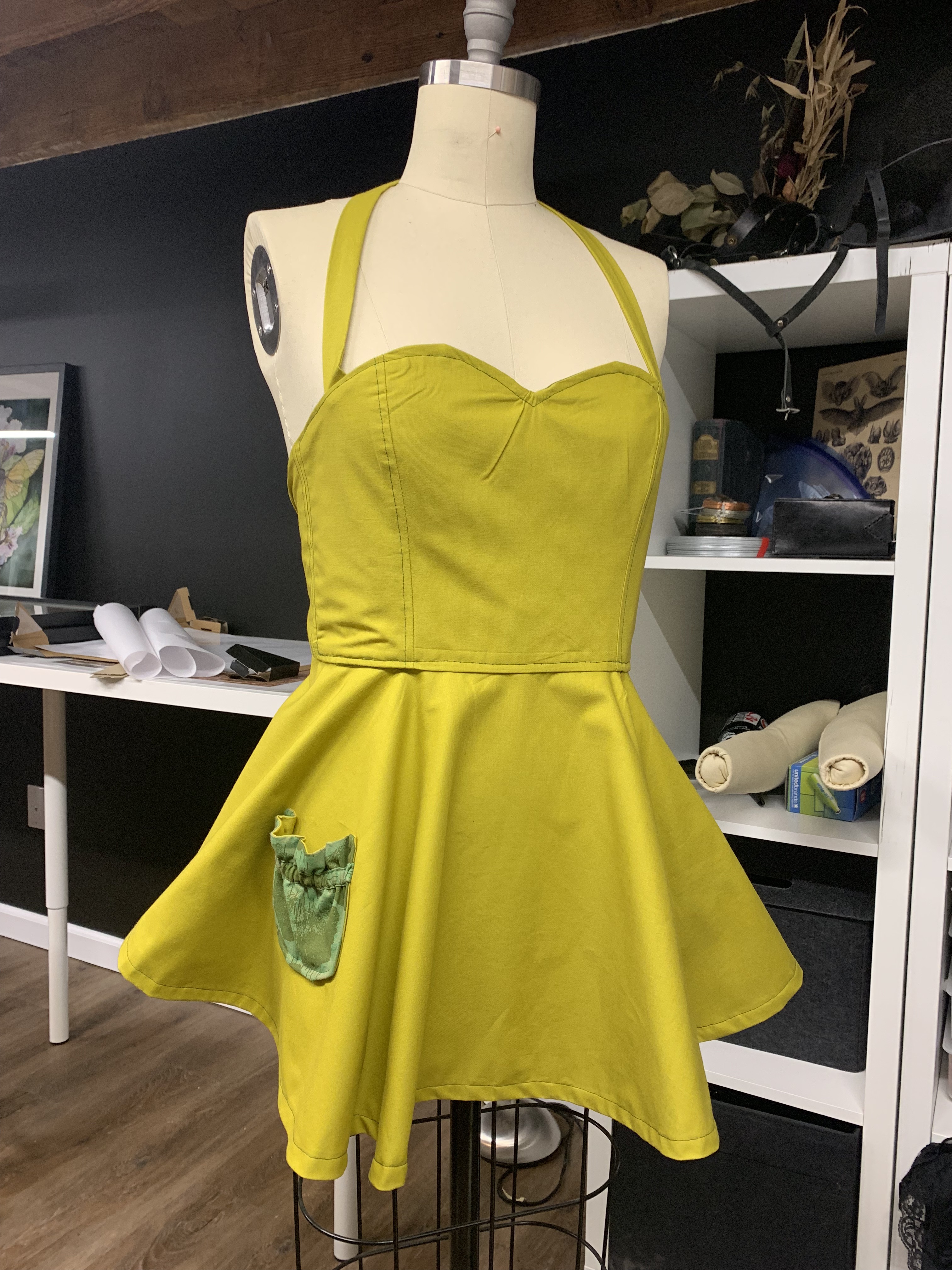 I used a pattern purchased off of Amazon here for my first project. In retrospect this was biting off more than I should have tried for great results, but completion was well within the realm of possibility for a beginner with access to Google and a partner with sewing experience.

The pattern was easy to follow. This step was probably the most complicated, where I needed to sew my pieces together inside out then pull them out, without accidentally flipping anything:

I think I probably didn’t cut out my pieces precisely enough and ended up with some issues in the waist line of the garment that you can see on both the green and yellow sides of the apron where the center panels meet the side panels (on the model’s right side). I’ve since improved my accuracy a little bit in other projects and practice, but cutting and aligning edges while keeping to my seam allowance proves challenging.

I could have also used the yellow thread I picked up to better hide or bring attention to seams, but changing thread on my partner’s unfamiliar Pfaff felt intimidating so I didn’t make the switch while working on differently colored pieces. I’m not disappointed that I “hid” my poor first attempt at seams - this project definitely turned out better than anticipated because of happy accidents obscuring simple beginner mistakes like that.

Here’s an example of where inaccuracy in seam length due to poor cutting technique can bite you. The seam was pinned as I sewed it, so inconsistencies in the seam edge were exacerbated over the length as I removed pins and the fabric bunched on top while the foot of the machine remained consistent in how much fabric it “ate” with each step. This resulted in some weird gathers at the waist that I wish didn’t exist, but I’ve definitely learned from. 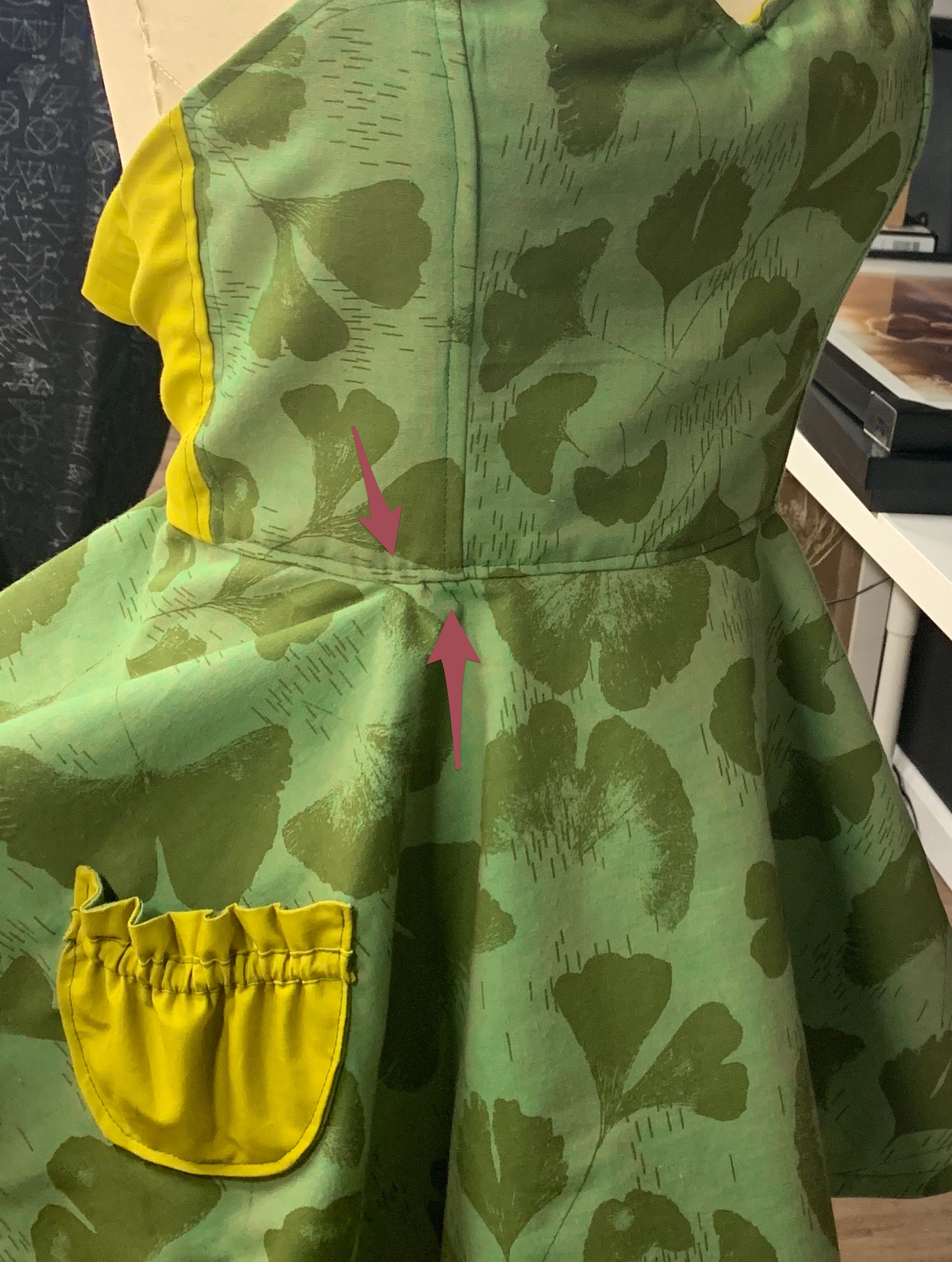 You can also see that I messed up the positioning of the straps on the neckline by winging their location. The purple arrows show where they should be and could be moved to. The pattern told me to mark their location more thoroughly but I neglected to, not understanding the importance of this positioning in how the apron sits on my chest. The garment will gap forward (blue arrow) because the mannequin grabs and holds the cotton fabric in place better than if worn on the skin or normal clothing, so it doesn’t sit quite right. I can fix this by ripping the seam in those two locations and running a simple stitch and backstitch on either side of it again. It won’t be quite as nicely finished but it’ll be more wearable, and I do rather like this apron and want to use it more. 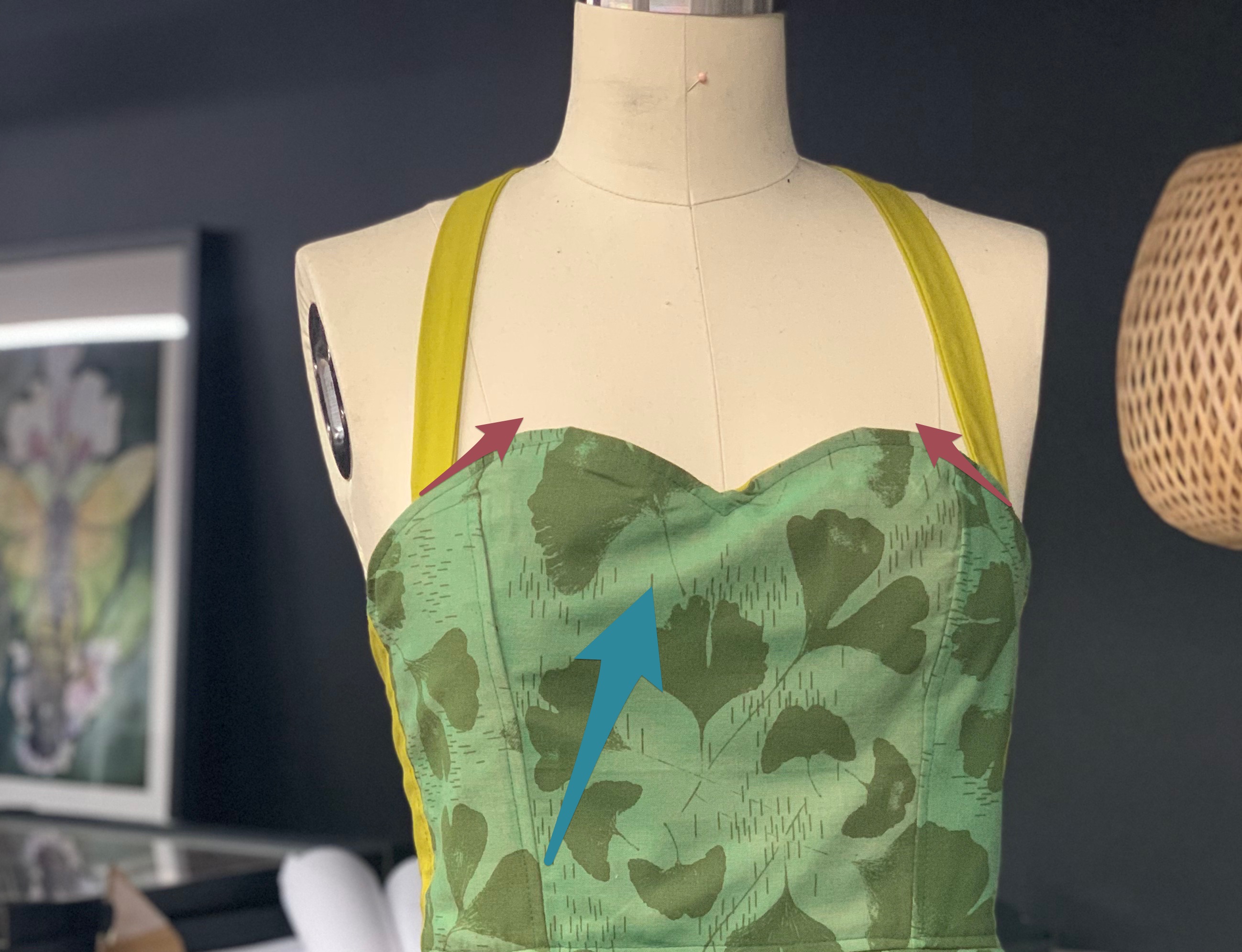