A few months back I applied to Metis - a Data Science and Machine Learning bootcamp. I’d been looking for a new path into the future for a while, one that wouldn’t involve quite as much emotional labor as I’d been putting out (I spent the last 3.5 years as the primary support engineer for a small startup) and that would challenge me to solve puzzles on a daily basis.

I taught myself just enough calculus, matrix math, statistics and python to take their acceptance exam (a full 48 hours long, plus a live interview!) and despite all odds, was accepted for their cohort starting January 7th.

I’ve had my head down since, working on learning enough to not flounder too badly when classes started in early January. Metis assigns 80+ hours of prework before you begin so that everyone is more or less on the same page when we start, though of course our backgrounds are varied. I’m now a week and a half in and things are better than I had hoped.

Metis’ curriculum is largely project based, which is a substantial part of what drew me to the program (in addition to being fully accredited, focusing on developing Machine Learning skills [which was very literally a childhood dream of mine] and their extensive career support).

Our first week in class involved getting to know each other and our new workflow with a group project. The goals for the project were deliberately vague (though specifying our use of a dataset from the New York MTA), allowing us to creatively interpret a prompt the class received in order to capitalize on MTA turnstile entrance/exit data from the last two years. We decided to assist a theoretical ‘Women Tech Women Yes’ outreach group in placing their teams near NYC subway entrances to maximize outreach for an upcoming event of theirs held in July of this year. 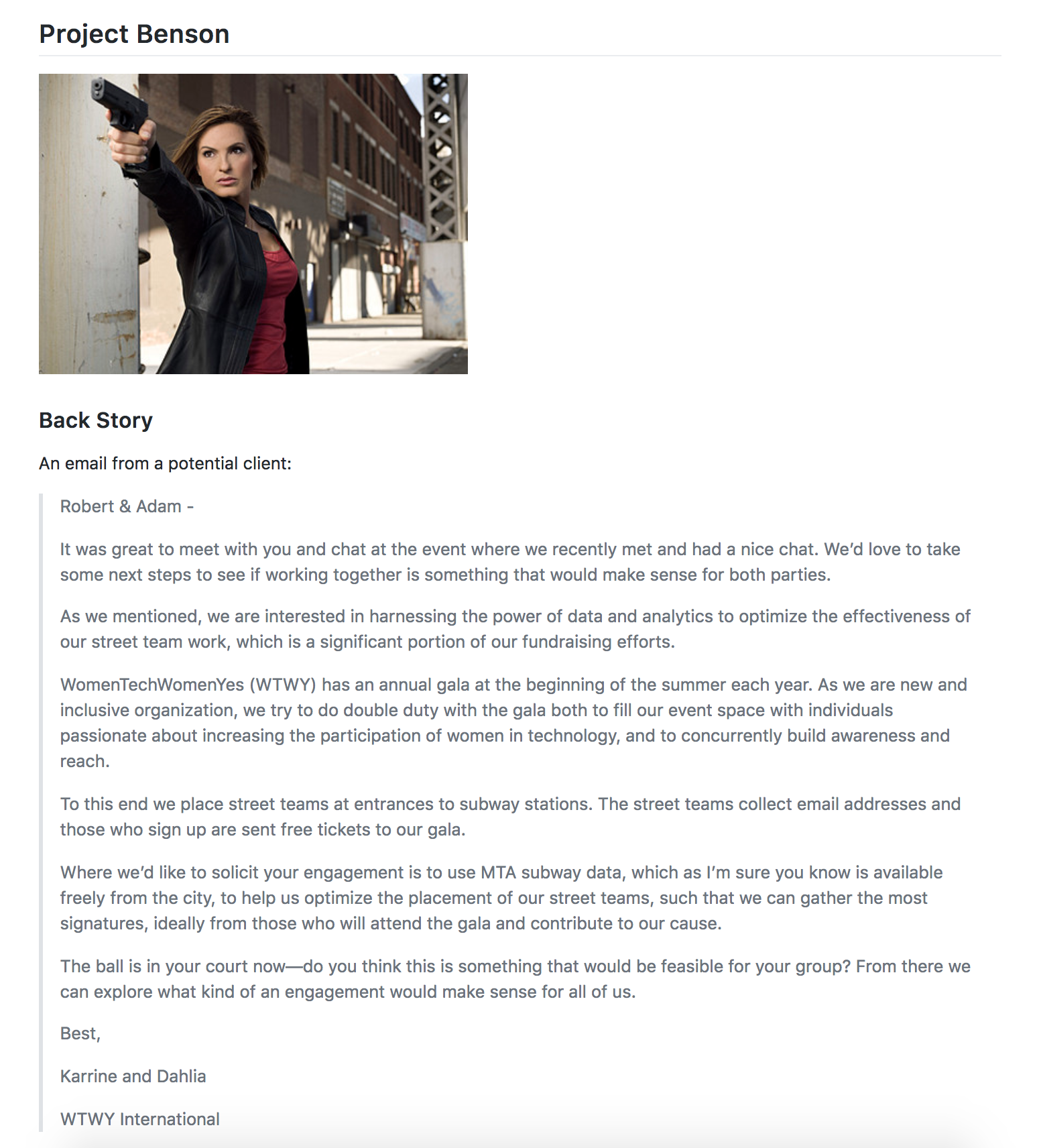 During this project I rediscovered a deeply held love for building keynote presentations. I’m more than a little bit excited to share our insights (and memes) with you.

Before we sat down to dig into the data we found through data.ny.gov we wanted to make sure we understood our problem and how to solve it: 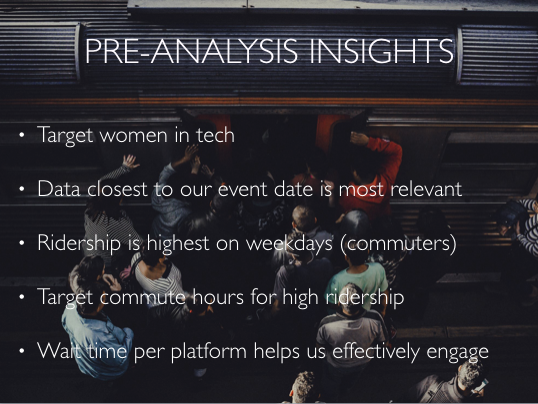 The most important takeaway here was that we needed to focus our efforts on an appropriate and relevant period of time, on the people (women!) we wanted to bring into our event, and that we needed to optimize how and when we were engaging with our potential invitees.

But how to do that? 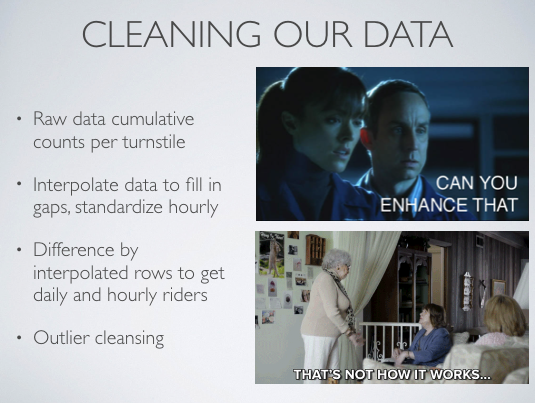 First things first - this data is nasty. Capital-N Naaaasty. Whitespace, negative counts, buffer overflows galore. Irregular readings? Of course. Missing readings? You betcha! So we spent a ton of time on fixing all of that and moved on with our lives.

Next up: daily averages for the 2 months preceding the event we’re helping. This graph was an excellent exercise both in learning seaborn (a very popular graphing library used by most data scientists) and in figuring out where to focus our efforts further. Note that 23rd St Station here is actually a cumulative representation of three unique stations with 23rd in the name (see: that dirty, dirty data) - we had limited time to work on this project so we ignored this specific result in favor of those stations that were obviously larger “fish” we could fry. 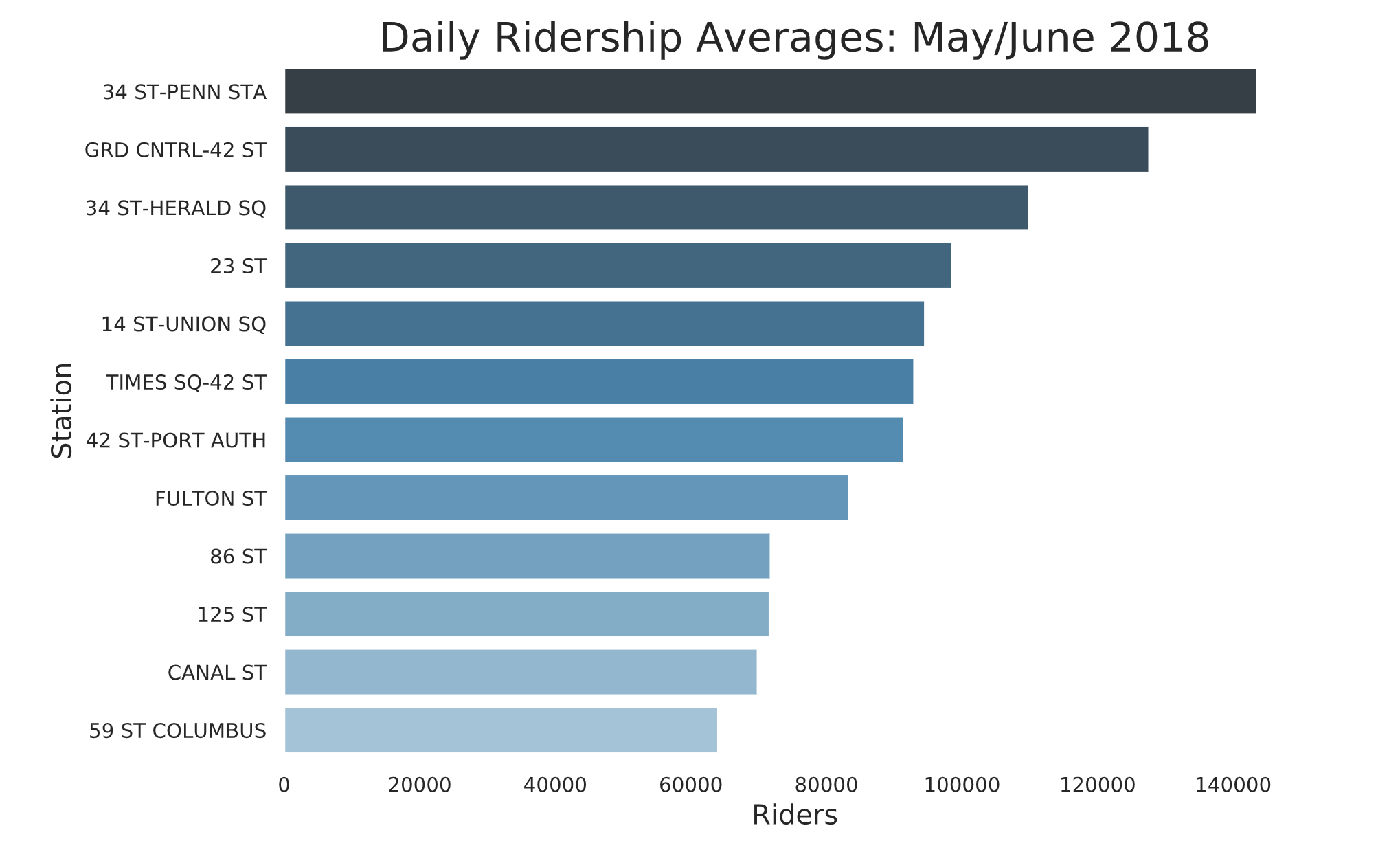 We had our daily averages, but we needed to go deeper. Which days of the week were people riding the trains most often?

The answer to this is a bit obvious (commuting making up the bulk of ridership numbers) but it was worth proving out with the data. 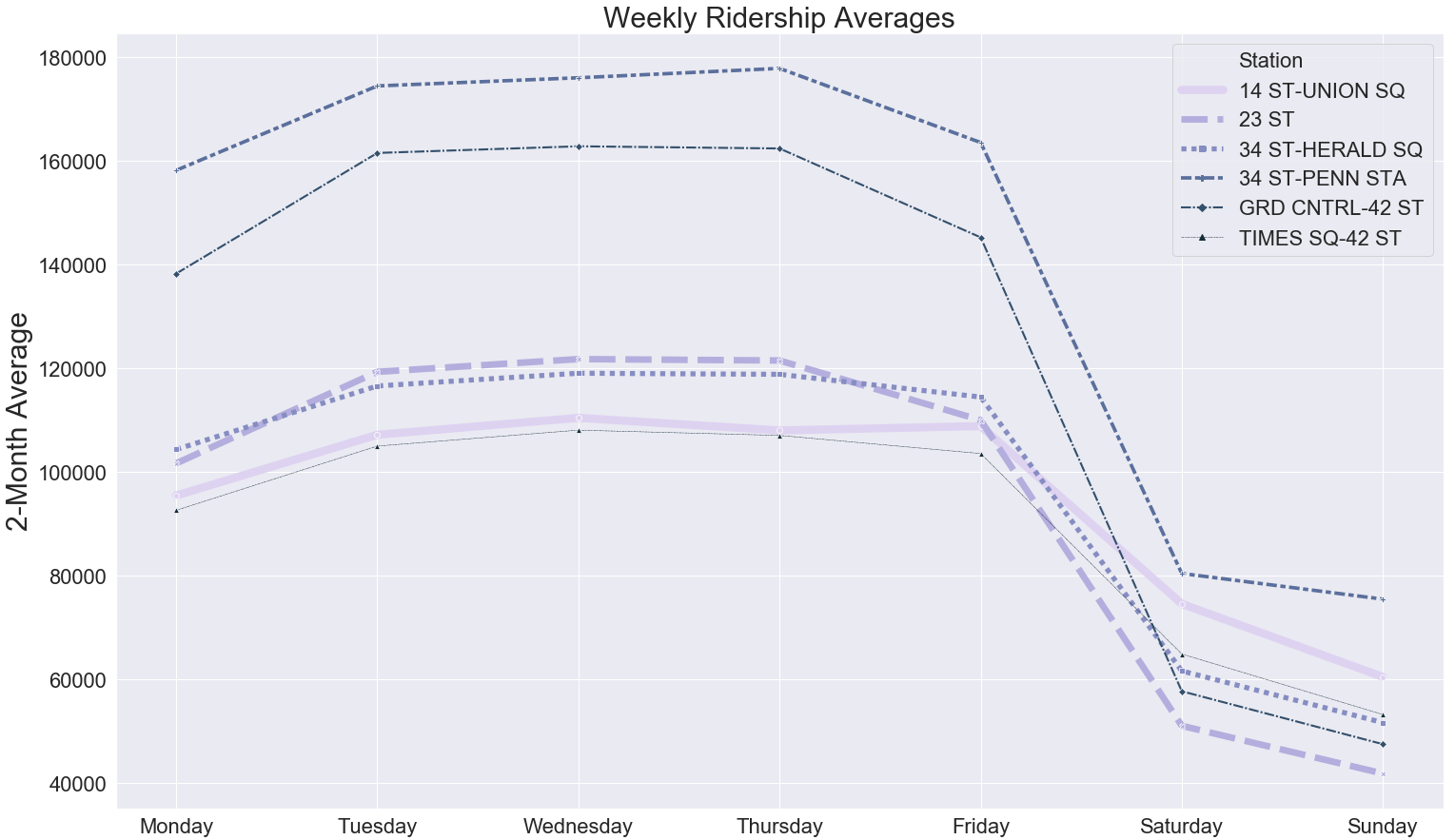 Look at that beautiful dropoff. Couldn’t be clearer. Now - what times should we be at our posts, soliciting female tech workers to join us for our event? 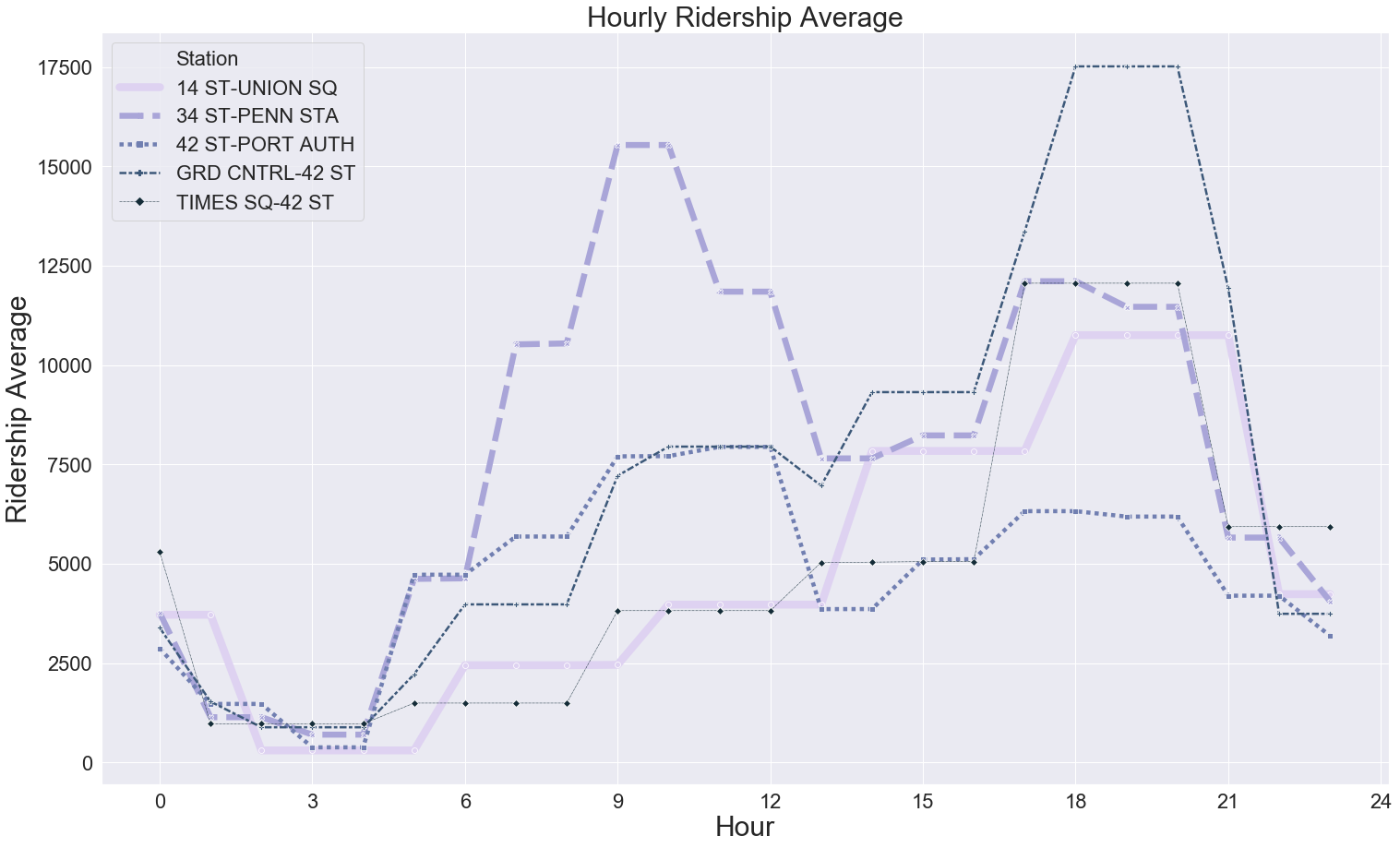 This visualization showed us that there were some obvious peaks in ridership at our high-ridership stations during the morning and evening commutes varying with which station you looked at. You can also tell I learned how to make backgrounds transparent with seaborn.

But what if we can go even deeper? How do we best target women in tech, not just tech workers OR women? 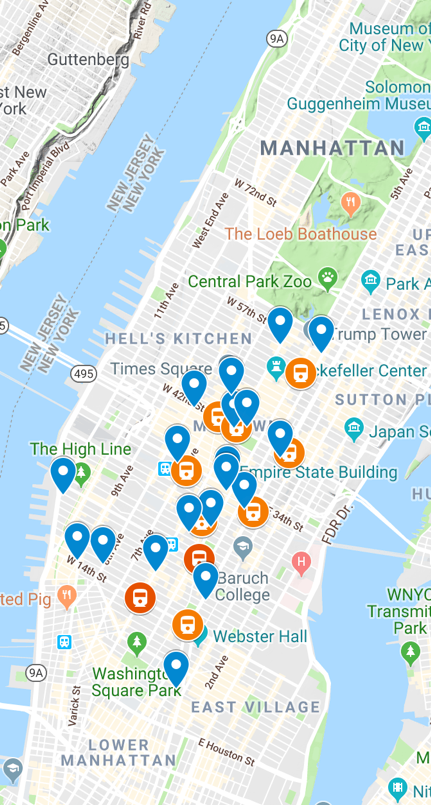 It was clear after some digging that there was a distinct pattern revealed when we looked into who was employing women in the tech sector in NYC. The area shown in our map here represented a particularly dense area containing tech companies Forbes claims employ a large number of women. Even better is that this list happened to overlap heavily with the areas served by our busiest train stations. I love when things come together like this, but it’s also a reasonably obvious correlation in retrospect: companies with many employees would certainly employ many women in pure numbers, and would contribute heavily to the traffic at the stations surrounding their main offices.

One of my favorite parts of this project (okay, it was actually just my favorite graph) was an insight my group member Marc Kelechava brought to the table. It turns out that the MTA also provides live data, and from that we were able to pull statistics that showed us which platforms/lines were most often experiencing higher than average delays. I.e. we were able to predict which stations would contain a high number of bored and waiting travelers. We cross referenced line data with this live data in order to recommend where to put boots on the ground and interact with waiting passengers on the platforms themselves, not just at entrances and exits. 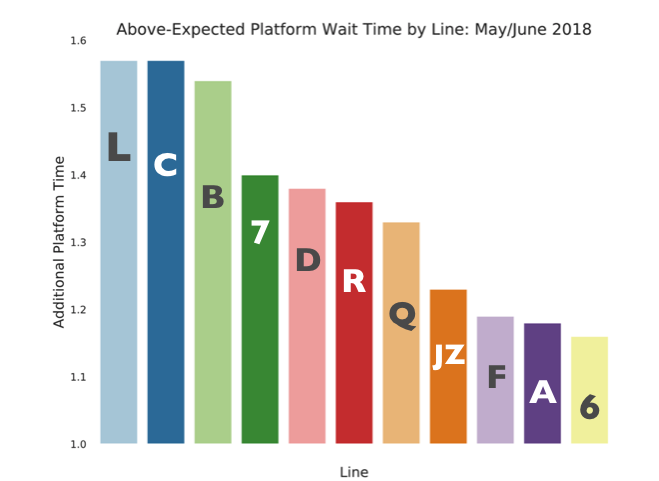 Our recommendations based off of this statistical analysis are as follows: 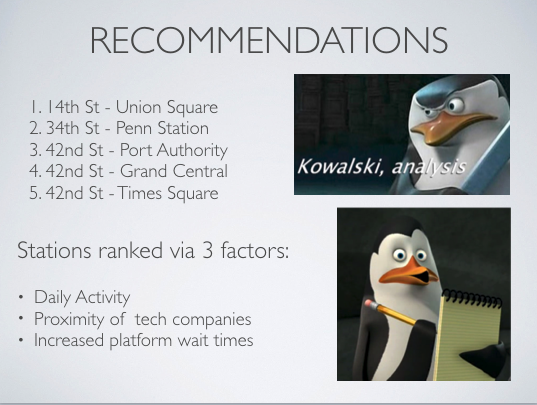 For those of you who didn’t grow up during the turn of the millenium, those penguins are taking over Manhattan as part of the movie Madagascar. It felt appropriate at the time.

Images should all be under fair use for education, as this was just a class project (and Metis does require we blog about our projects [though I’d probably write this up anyway]).

Images and links from: